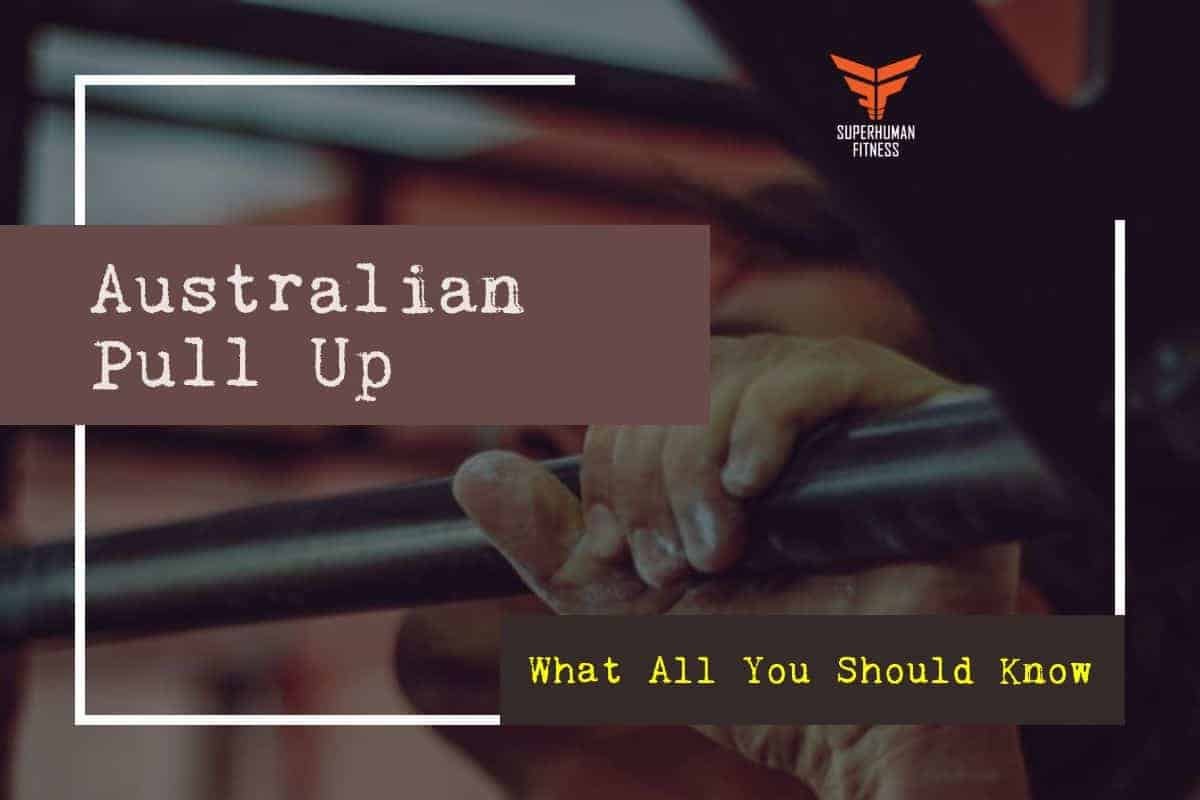 Australian Pull Up, What All You Should Know

Pulling exercises are quite important exercises no matter if you are a calisthenics athlete or a power lifter. While the pulling exercises specifically pull ups and chin ups have a lot to offer they are quite difficult to perform too. This is where the Australian Pull ups come in handy.

Australian pull-up is the best exercise for those who are working to a standard pull-up. It is also called as horizontal pull-up or bodyweight row. Australian also involves in “down under” which is above the waist height and feet rest on the ground.

Australian Pull-ups is to work for the upper body, the muscles of the back, abs, and biceps. The pullup training is amazing as the body works against the gravity. Pull-ups are good to pull against the resistance and avoid pitfalls. It is done in the best way at the waist-height bar.

• It focuses on strength

• The muscles that involve in the exercise are Back, Shoulders, Biceps, and Abs

• The equipment used is Pull-up Bar.

Australian pull up or more commonly known as Inverted Rows or Bodyweight Rows are one of the best ways to strengthen your back muscles. It works on all the major back muscles that we are going to discuss later in the article.

Australian pull up is a great way to progress towards the regular pull ups if your body lacks the strength to perform them. It is a calisthenics exercise that majorly works on the back muscles but the entire body gets the benefits Australian pull ups have to offer. And the best part of this exercise is that you can challenge the entire body without the need for any equipment or gym membership.

The unusual movement involved in the Australian pull up will also add a fun element to your routine. It can be performed at the start of your workout routine and or at the end, to complete the session with a full body workout.

In this post, we will discuss the technique involved in Australian pull up and how to master it, the muscle group this exercise works on, the benefits of Australian pull ups, who should do it and how much should it be done, and its comparison with a regular pushup.

The Technique to Master The Art of Australian Pull Up

Although! Advance level athletes can incorporate the Australian pull ups in their fitness program but as mentioned above this exercise is basically for beginners and usually used as a progression towards the advance exercises like pull ups and muscle ups.

Australian pull up majorly works on various muscle groups like Biceps, Shoulders, legs, glutes, and abs because of the unconventional range of motion but the primary focus remains the back muscles. The main muscles that get worked by Australian Pull Ups are Traps, Lats, rhomboids and deltoids.

You can also work the muscles differently by changing the grip slightly like a little wider grip than the shoulder width or holding the bar from under arm grip.

Variations Of Australian Pull Up

If you are an absolute beginner and think that performing it’ll be difficult or you to perform Australian Pull Up or incline pull up or the inverted rows then there are two different modifications you can adopt.

a. Fixing the bar at a lower height and keeping the hips and legs on the ground. This is a great way to reduce the exercise difficulty like knee pushup when you are not able to perform a regular push up.

b. The next variation is by performed by bending the knees and keeping the feet on ground rather than the heels. This variation is little more difficult than the previous one and more muscles get worked in this.

Once, you are able to perform regular Australian pull ups it’s time to introduce some difficulty level to make it more challenging to reap the maximum benefits of the exercise.

There are three ways that can be used to increase the difficulty level for the exercise.

a. By wearing a weighted vest.

b. By elevating the feet higher.

c. By extending the time to perform a repetition.

Benefits Of Australian Pull Up:

Australian pull up offers slightly different benefits from the regular pull ups or chin ups as the range of motion to perform this exercise works on the muscles differently.

Australian pull ups can also be integrated as warm up exercise during your back or pulling exercise days if you are one of the advance level athletes.

Now why would anyone compare a pulling exercise with a pushing exercise? It is true that both exercises are completely different and offers different benefits but the main reason why we are comparing both the exercises is because they both have similar range of motion.

If you look closely Australian pull up is exactly the opposite of regular push up, or we can say that inverted rows or our Aussie pull up is a down under pushup.

Australian pull ups are fundamental elements by which we can gain the strength needed to perform on the high bar. You can perform it anywhere, all you need is a pull up bar. It can also be used in superset after increasing reps and pull-ups.

Gradually this exercise turns in to plyometric movements switching from wide grip to the narrow grip or vice versa. Australian chin up is also very useful and easy exercise.

Australian Pull up works on a variety of muscle groups and helps you build strength for many other advance level exercises. Changing the grip and the position of your body also allows you to target muscles differently.

The page you requested could not be found. Try refining your search, or use the navigation above to locate the post.

Sharing the article on social media also enables you to come back to the article and re-learn!